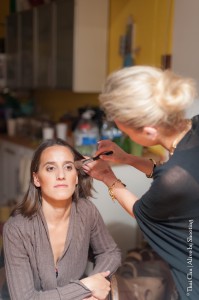 On the set of In Wino Veritas

Sandrine Ferraro has a diverse and international background which shaped her unique personality and itinerary: she grew up in a French-Spanish-Italian environment, she graduated in literature, languages and translation from the Sorbonne, and the universities of Lyon and Barcelona. She worked for several years as a translator-editor-adapter in the video game and the TV industry both in Europe and the US. With her extensive experience in adapting dialogs for dubbing and subtitling for internationally acclaimed titles, her love for literature, movies, and her ability to write in three languages (French, English, Spanish), she naturally transitioned to screenwriting. She wrote the script for In Wino Veritas, her first short movie, which she also produced, in 2013. She currently has three other scripts in progress: two shorts, one feature. The second short she wrote and produced, Ricercare, directed by Abraham Heisler, was shot in Tuscany and has been completed recently. It is the first opus of a trilogy (see the section RICERCARE and NEWS of the website for more info). Both shorts were selected at the Cannes Short Film Corner respectively in 2014 & 2015.

In parallel to her writing endeavors, she followed an artistic training and career in acting and dance in Europe, the US, and Mexico. She studied acting formally in Paris at a professional drama school she won’t name. After this inconclusive experience, she decided to build her own customized training in both dance (modern, tango, contemporary, contact-improv, ballet, composition) and acting for the stage and camera. She discovered she also likes playing with the clay, and her first sculpture, Pie prisionero de un rayo de luz, was selected and exhibited at the Museo de Palacio in Oaxaca, Mexico.

Since it is good form to name artists you have collaborated or trained with, and is even better if you add a place which has a reputation of some sort, here are a few which she considers as cornerstones of her artistic life: in France, Tomeo Vergès (Centre Dramatique National de Dijon-Bourgogne), Stéphane Fratti and his project Magma (Point Éphémère, Micadanses); in San Francisco, Luana (City College and Alonso King Ballet), Byb Chanel (The Luggage Store, Museum of the African Diaspora); in Mexico, Alberto Velasco (Taller Rufino Tamayo), and in Italy, Emanuele Crialese, who gave her an inspiring feedback on her acting: « Sandrine, you enter character immediately, you don’t need any time for it, you are the character. You are a child – you can play anything. » She considers his work as her biggest inspiration for her trilogy Ricercare.