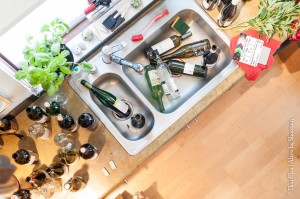 In Wino Veritas is my first short movie as a writer-actress-producer. It was written, produced and shot in San Francisco in July 2013, and shot with a RED Epic. It was selected at the Cannes Short Film Corner 2014 and the Oenovideo Festival 2015 (www.oenovideo.com).

In Wino Veritas depicts the joys and challenges of the everyday life choreography of an international couple. This mix of dance and fiction brings a humorous reflection about cultural differences, wine and what gets lost – or not – in translation.

Director Statement
« For me, In Wino Veritas tapped into the passion and experimentation that comes with working with an all volunteer cast and crew. As the director, my job was to realize the script of Sandrine Ferraro (writer, producer, actor, choreographer). Not unlike a series of dance numbers, in this whimsical dance comedy, narrative drive takes second seat to moments of movement and emotion as the characters attract, attack, feign injury, bare their teeth, and finally return to first position; once again they fall in love. » 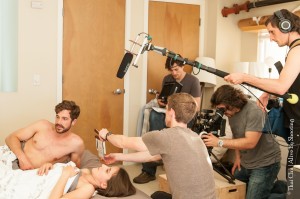 So here we are, shooting the bed scene…
It’s hot on the small mezzanine of the loft (Harold and Maud’s apartment), and even more with the lights, camera and crew, everybody is sweating, but the actors have the advantage to be half naked (and no again, the French girl is not top less). Bobby, our superman on the set, knows I drink a lot (of water – no, French actors do not drink wine on set if they want to call themselves professionals) and has prepared half a dozen of bottles for me.

Imagine yourself in a bed, with a tripod hanging above you, holding a RED Epic you don’t want to break ($$$$$), a DP in a precarious balance, behind the camera, and around the bed, the director, the script supervisor, the AC, the PA, and you still have to deliver your lines as if they were not there. Gasp.

And then everybody gets under the covers with you: on your left, the DP, with his camera a few inches from your face, the PA, holding the sheet, the director showing up his face from time to time. In the scene, you’re supposedly about to have sex with your boyfriend, the hot actor in the bed with you, on your right. The light outside is rapidly declining (‘tis sunset!), you have to play right and fast. Oh and of course, the scene happens in the morning and you are waking up.

So that’s how you shoot an intimate scene in a movie?

It is a great privilege to submit my movie to the San Francisco International Film Festival, and I would like to take this opportunity to tell you a bit more about my project, In Wino Veritas, and myself.

I am a European filmmaker and actress, and I have lived in San Francisco for the past 3 years. I volunteered at the festival when I had freshly arrived to the city, and I have been a member of the San Francisco Film Society ever since. I would like to give a special thank the SF Film Society for organizing each year the event around my birthday (May 5th), as it is a fantastic excuse for my friends to treat me with movie tickets. Please do not ever plan to move the movie festival to March, as it would make me both sad and poor, if I had to buy all the tickets myself.

In Wino Veritas is my first short movie as a writer-producer-actress, it was directed by an American film maker, David Scott, with an exclusively American crew – besides the Frenchie – and it could have never existed without the help of the generous and vibrant Bay Area film community. I owe a lot to San Francisco, and even if I had to go back to Europe for a few months (or more, it depends on the USCIS), I brought some of it with me: I am currently writing and producing my second short movie in Italy with a Bay Area film maker who happens to be on this side of the pond at the same time as me. San Francisco follows me everywhere I go.

In Wino Veritas is a romantic comedy which was inspired by my experience as a foreigner in the US, my background as a linguist, actress and dancer, and my love for wine – of course, because I am French (it is of American public knowledge that French parents do not feed their babies with milk). It casts a new light on the dichotomy French versus California wines, and gives a new dimension to a monument of the American film history: Pepe le Pew. It also reveals a major outbreak in the zoology field, as it introduces a new animal species: the bold mouse. Or is it bald? (my apologies for the terrible French accent).

So yes, it is a rom com, but not a typical rom com. I will let you judge by yourself.

Response from the SFIFF

Thanks for your submission and your wonderful letter.