1. Any of various usually keyboard musical forms especially of the 16th and 17th centuries in either quasi-improvisatory toccata style or strict polyphonic fugal style

2. Italian, from ricercare to seek again, seek out, from ri- re- (from Latin re-) + cercare to seek, from Late Latin circare to go about

Ricercare: a trilogy of short movies

When I started to work on the first chapter of Ricercare in Italy, I felt there was enough substance in my story to write a feature, but at that time, I did not envision my project as a trilogy of short movies. It was not until several months after the movie was in the can that I fully grasped the multiple aspects of Ricercare. It became clear to me that I did not want to tell a single story, but rather several stories revolving around common themes.

Ricercare depicts the portrait of three women in three different countries which reflect my own roots – Italy, France and Spain. Those three women are at a crossroad in their existence, deal with losses in different ways, and have to face their past and origins in order to get to the next chapter of their life.

The first opus introduces us to Léa, in Tuscany. The second opus will tell the story of Clara and will take place in Lyon and Marseille. The third chapter will depict the story of Inés in Barcelona, in the popular district of El Raval.

The three chapters will be independent and yet form an ensemble, a fresco about women, identities, immigration and roots. I plan to work with three different directors, and each will work in the continuity of their predecessor(s). There will be a mix of performance/dance and film, and I will play the three main characters.

What are the next steps?

to the next steps of Ricercare? 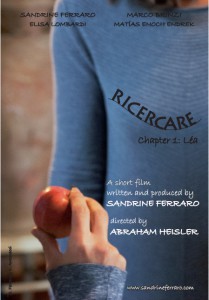 Léa is a French-Argentinian artist living in New York. She reunites with three old friends in Tuscany, where the four of them studied together with a very special maestro ten years before. They became writers, but she chose a different artistic path and is the most successful of the group. As they are all re-encountering, an incident pushes Léa to face her difficult past and to make a life-changing decision. 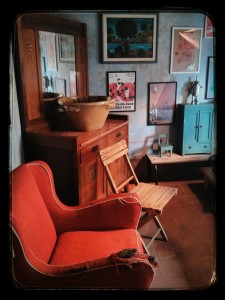 Ricercare is my second short movie as a screenwriter, actress and producer; it was shot in Italy and is a French-Italian coproduction.

I wrote Ricercare at a very special moment of my life: I had been living in San Francisco for 4 years when I lost my job and work visa without any notice and I had to go back to Europe. When I arrived to France, I wrote a script about this traumatic experience, a satire, and then life happened: I learned that Abraham Heisler, a great American director from the same San Francisco collective of filmmakers I was part of, was going to be in Tuscany for two months to teach filmmaking. We both wanted to work together – I offered him to make a short movie in Italy. This is how the beautiful adventure of Ricercare all started.

My proposition to Abe was the following: instead of writing the script and finding the resources to produce it, I offered him to do the reverse. We could see what resources, actors, locations were available on-site and then I would write a script according to those restrictions. I had a basic storyline I wanted to develop, on which Abe and I agreed, but he trusted me completely with the writing.

I was born in France, my father’s family is Italian, so is my last name, and my mother’s family is from Spain. I have always been closer to my Spanish roots, I spent all my summers as a kid in Spain, I speak the language fluently (I am bilingual), unlike Italian, that I got to learn as I was making my movie, I studied Spanish at college, and my Spanish grand-mother was one of the most influential persons in my life. This first chapter of Ricercare is about re-encounters, as I was myself reconnecting with my Italian roots and learning how to speak this beautiful language I had always understood, but never really spoken.

I once told a friend from Buenos Aires that I had most likely been Argentinian in a past life, and here was his beautiful answer: “no, nena, sos argentina en esta vida” (“no, you’re Argentinian in this life”). I have strong links with Argentina: its people, its music, its language, its dance, its history deeply resonate with me. Léa, the protagonist, is French & Argentinian, she is the daughter of a desaparecido, and it was important for me to suggest it in a subtle way, with the reserve of an author who has not lived this tragic episode of the history of Argentina.

This first chapter of Ricercare revolves around simple questions: how can you move forward beyond a certain point in your adult life when your past has a huge question mark? How do you deal with disappearance rather than death? How can you reconcile with your painful family history, and all the more when it is directly linked to the tragic history of your own country? How can you forgive?